This blog (gnreid.blogspot.com) used to be my personal blog called 'I got no work done today because…' from 2004 until early 2021. After some time of neglect I decided that I should just delete it and concentrate on the other websites I run. However, when reviewing some of my posts over the years I came upon the post below 'Whatever happened to Kevin Cullen?'.

Although there are very little comments on the post itself I still regularly get asked or contacted (including publishers) about Kevin Cullen and his work and so out of interest I've decided to leave this blog running with that post so that anyone searching for information on Kevin Cullen (or who knows maybe Kevin himself) can see it and offer information or comment.

The answer to the question that I get asked is that yes I did find out what had happened to Kevin Cullen. Sort of. It's a tricky question to answer.

I spoke to the family of Kevin Cullen and while trying to respect everyone's feelings on the matter it became apparent it wasn't as easy as just getting in contact with Kevin to ask him about his comic work. It was strongly implied that Kevin wouldn't be interested in talking to me or discussing his art. Even that is maybe wrong of me to write as maybe Kevin wasn't even aware that I would like to talk to him as I only ever spoke to two members of his family and they where not in regular contact with him (I believe). It could be that they never mentioned to him my interest as they thought, knowing him better than I, that it wouldn't be something he'd want to do.

So how can I answer this? I believe Kevin left the comic industry and 'art' behind. I'll not offer any reasons or my thoughts on why this happened. If Kevin ever does read these posts and wishes to contact me then I'd be happy to hear from him. I hope he is well and happy. 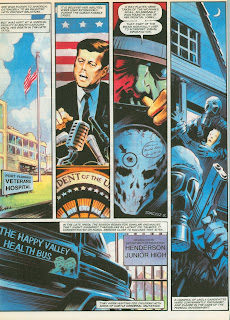 I've worked in splendid isolation on the top floor of my house, my studio is a great size and its joined upstairs by a small bathroom and another good sized room. This secondary room had become the 'dump it in there' room and I'm ashamed to say it still had boxes unopened from when we moved into the house eight years previous. But all that has had to change. We have three children running around this house now and the 'spare' room needed sorting to become a bedroom and with that came some hard choices. Having read comics solidly since I was 14 and being somewhat of a hoarder I have a LOT of comics, books, magazines, art materials and just stuff. So much so that its taken about six months to clear through the piles of things in the spare room and come to a decision as to their fate, keep them, sell them, give them away or in the bin you go. Invariably one thing that slows the whole process down is that you keep rediscovering items you've been piling up a
Read more