Time is the only Enemy - Refs

One of my artistic heroes is Matt Brooker (who goes by the pseudonym of D'Israeli). Not only is he a great and inventive artist but he's a thoroughly nice chap and I had the pleasure of many a meeting with the man when he lived in Edinburgh a few years past. When his work graces the weekly comic 2000ad and if we are lucky he's not bogged down with work or moving location (he currently resides in Spain), he posts excellent pieces on his blog pointing out the various references and little extras that appear in his work. Much fun can be had scouring his art for these little 'Easter Eggs' in the story and often he fits in recurring 'in jokes'. Apart from these reference posts he also writes highly detailed accounts of how he approached creating his work and I highly recommend all artists take the time to check these out.

Now I haven't produced a large body of work for 2000ad but I do enjoy adding in my own little references to the occasional strip I produce for them. I'll be the first to admit that although I have a pretty good memory I do have a tendency to muddle up the order of events and forget certain details. So for my own amusement and sense of self archiving I've decided to do my own 'refs' post for the last strip that just appeared in 2000ad, hopefully it'll be of interest to more than just myself in future forgetful years.

2000ad Prog 1837, Future Shock, Time is the only Enemy written by David Baillie 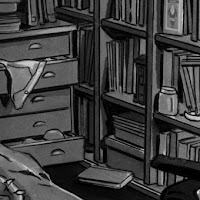 Page 1, Panel 1 -  David wrote that this panel showed a crammed bedroom/office and actually sent along a few reference shots of his own messy book strewn room which made me smile as one glance at my work studio would show that I'm more than used to such an environment. In fact you need to know exactly the right limbo dance to successfully negotiate the piles of comics, books and bric-a-brac to make it across the room. I didn't really use Davids reference for this first panel but I did add in a few of his own little objects from the shots as a little fun thing for him to spot. 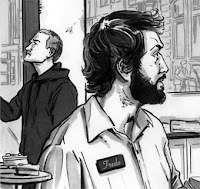 Page 1, Panel 2 - Ross and Stanley.  Except for the first panel, the whole story takes place in the same (albeit changing) location of a coffee shop. I knew this would give me the opportunity to add in the occasional 'guest' appearance in the background, so straight away we have my friend Ross Hendry who makes his second guest appearance having previously popped up in a Megazine strip a few years back. One of my favourite film directors is Stanley Kubrick and I figured he'd make a good job of playing the part of Fredo the coffee shop worker.

Hewligan - The strip features the author of the story, Mr David Baillie, appearing throughout and although I didn't attempt to capture David's exact likeness for the strip, the character does feature strong similarities i.e. bald head. David wrote that he was wearing a Hewligan's Haircut t-shirt in the story, this as all 2000ad fans would know refers to a strip written by Peter Milligan and drawn by Jamie Hewlett which ran from Progs 700 to 707 back in 1990. So this gave me chance to draw the character, a nice added bonus. 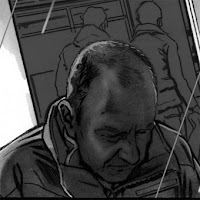 Page 1, Panel 4 - The missing man. As I said, I knew I'd be able to put a few friends into the background of this strip and so I asked my mate Scott if he fancied appearing, a definite yes from him and in he went only to discover that no sign of him would appear in print as the 'Future Shock' title went right over him :) Ha, how I laughed. In an artistic way though it is sad the figure disappeared as it did help explain the scene was seen from outside the coffee shop better but the title has to go somewhere and there aren't many obvious places for the letterer (superbly handled by Simon Bowland) to put it. 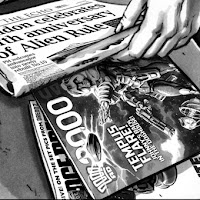 Papers and Progs - I knew I was going to have to create a few papers for the coffee shop including the main 'Aliens in London' paper but the script also called for an issue of 2000ad to be on show. I've cowered before Tharg the Mighty alien editor of 2000ad before and whimpered that I'd love to draw a cover for the comic but so far my dreams haven't come true so when I saw the opportunity to make my own cover for the strip I jumped at the chance. Not only did I fake up a 2000ad but I figured I should add in a Megazine too, I knew these would appear pretty small but that didn't stop me from having a bit of fun. The Prog number on the cover is actually 1880 so you never know, that is a while yet it could yet happen :) The cover features my Johnny Alpha commission which you can see here, a nice little bonus for the owner. The Judge Dredd Megazine cover you hardly see a glimpse of but I couldn't resist adding in the mention of a sequel to the Dredd film of last summer. The Echo newspaper features a modified drawing I did of a Dalek Saucer over Westminster which I thought suited the piece and also features a picture of the 'real' Mr Baillie in what would appear to be a shocking report of inter species love, more of a red top article than would suit the style of paper I created but I couldn't resist. 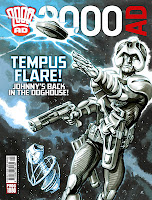 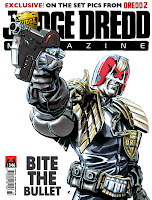 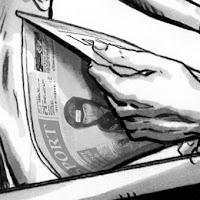 Page 2, Panel 2 - On the back of the paper on what would be the sports section you can just make out a picture of a boxer who happens to be my brother Craig. 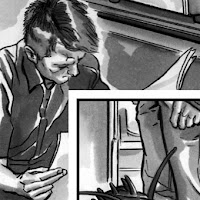 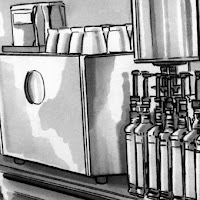 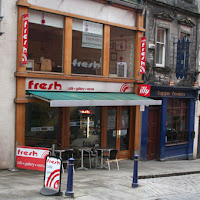 The coffee shop - Fresh. When I received the script I realised that it might be a good idea to find a coffee shop that would suit the story and photograph it for reference. As is usually the case this sounds a sensible thing to do but quite often doesn't work out. I did find a café in my local town which, thanks to the owner, was more than happy to let me snap some pictures but apart from the background to panel 3 it didn't work out as I had planned. However, even though we all know what a coffee shop is like it was of enormous help to go and take photographs and get a feel for all the little details that you might not naturally pick up on, so many thanks to Fresh in Dunfermline for letting me intrude on them and their customers with my camera. 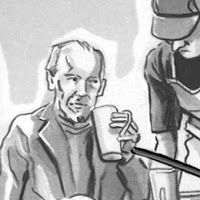 Page 2, Panel 5 - Another hidden customer is the much missed American comedian George Carlin, ok it isn't a great likeness of him but I was listening to a show of his when I drew the panel and I popped him in. And then he got covered by a word balloon. 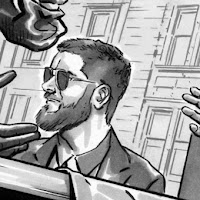 Page 3, Panel 1 - The guy with the shades and beard is my friend Graham Robb who I used to work with years ago. I didn't intend to draw him really until I suddenly realised that 'this guy in the background looks like Graham' and then went out my way to make sure he did look like him.

The Alien and the Dragon - So the Dragon is in the story from the very first panel and the Alien appears by the second page but I was hoping that by the third page and before the Alien explains everything to the writer, the reader would have picked up on their similarities. Knowing that the Aliens engineered the Dragon I figured they would share certain traits, it needed to look like a dragon as we know it (in this case more an oriental dragon than say your typical British version) but I picked certain shapes from the Alien to give to the Dragon. The three white eyes, the antenna and little horns for example. By the fifth panel I wanted to try and compliment the explanation by having the Dragon mimic the movement of the Alien too. 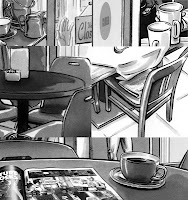 Time and the changes - So as Doctor Who likes to explain things this story was a bit 'Timey Wimey'. Having processed the script I had to make some decisions about how the Dragon would affect time and its environment. For example the years involved to age the writer could make a lot of things very different. I decided that the power of the Dragon would be localised to the writer and his immediate surroundings, say within a ten metre area time would be accelerated much faster and the further you moved away from him time would be more normal. So while the writer aged rapidly inside the changing coffee shop, outside time didn't change so quickly to the point that far enough away it would be just later on in the day from the point of the start of the story. Time changing so rapidly inside the shop meant that I had to regularly change certain elements to hopefully give that impression. So within the four pages you should be able to spot a regular change in table shape, size and colour, the chairs change, the cups change from scene to scene and of course the staff and decor (things like the floor, etc.). A couple of nice little touches that were also lost were things like the changing style of the 'Closed/Open' sign on the coffee shop door and on the third panel of the third page The Echo now read 'London celebrates fortieth anniversary…' 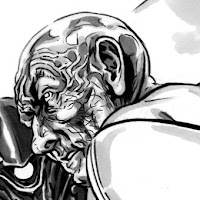 The ageing of the Writer was a consideration as well as it needed to be ongoing throughout and certain 'easy' things you could do to show ageing were not available. The character was already bald so no change in hair or even the loss of hair to show ageing. The most obvious thing to do is to start adding in wrinkles but I wanted to control the change better than that and measured the growth of things like the Writer's nose and ears, the sag of his jaw and chin, the change of the eyebrows and body changes like stooping, his back hunching, his body thinning and not filling out his jeans and t-shirt as before. These are the kind of things that if done right should work seamlessly and not jar the readers eye. After the death of the Writer I decided to cut the power of the Dragon and the last panel has the table and chairs default back to the original design seen in panel two of the first page.

And I think that is about it but probably more than you might have expected from just four pages. One more thing I'd like to note is that once again I changed my approach to creating the art for this story, although most people would never have noticed. My previous strips were either inked by someone else or I finished them off in Photoshop with digital inking and toning, this strip was toned with marker pens done in a similar style to a lot of the private commissions I've done in the last few years. Things like panel edges and little effects like the t-shirt where all added in with Photoshop but overall the art was created traditionally and I was pretty happy with the overall look I achieved.

My thanks have to go to David Baillie for writing a great little Future Shock and of course to the editor Tharg (Matt Smith) for commissioning me. It is always a pleasure and a treat to draw a strip for my favourite comic.
Labels: 2000AD Comics Future Shock Refs Sci-fi 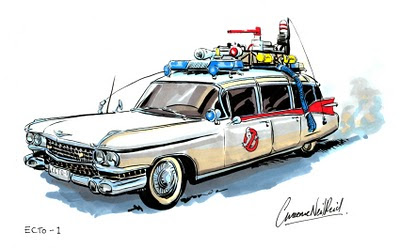 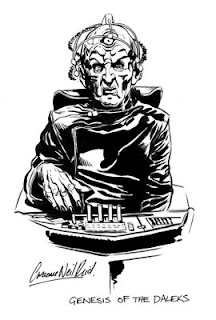 Genesis of the Daleks - Ink Sketch